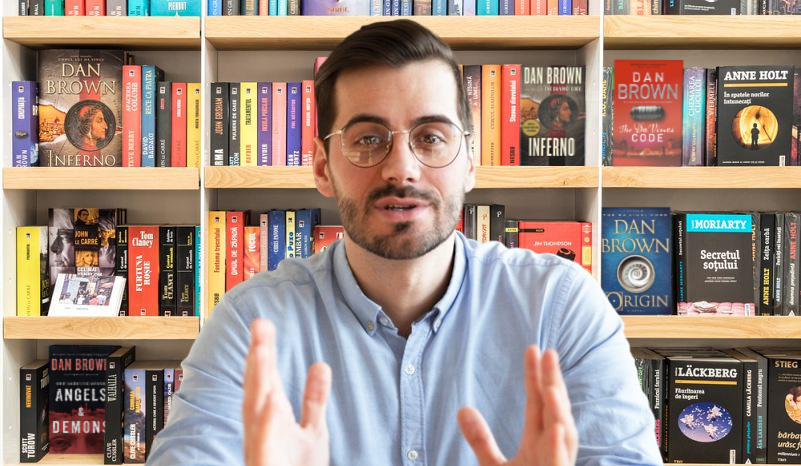 Scandal has engulfed a Brisbane high school after a senior teacher of Literature, Rodney Jankins, was stood down for owning the complete works of airport novel whore, Dan Brown. The horrifying discovery was made by English Head of Department, Edward Morrison, during an online faculty meeting, causing him to spit take a mouthful of his non-fat latte with soy milk and caramel drizzle across the screen of his laptop. Afterward, Morrison was heard gasping, “Rodney, is that Angels & Demons!?”, between spasms of dry-retching into a nearby wastepaper basket.

In an attempt to appear more academic during the Zoom meeting with his colleagues, Jankin’s decision to strategically position his laptop with his personal library in the background appears to have cost him his job. On the meticulously alphabetised bookshelf, Brown’s entire back catalogue – including his debut novel, Digital Fortress, that absolutely no one read – was clearly seen sandwiched with anal retentiveness between a leather bound copy of French novelist Honore de Balzac’s magnum opus The Human Comedy and the once banned salacious novel A Clockwork Orange by Anthony Burgess. “I’d rather share a pint of milk in dystopian England with the sadomachistic Alex than spend one long minute having my ear chewed off by Harvard know-it-all and God’s gift to bookish women, Robert Langdon,” opined Morrison. To make matters even worse, upon closer inspection, each novel was a movie tie-in edition, and some displayed evidence of being annotated.

Upon seeing the collection, a colleague of Jankins’ said, “I always knew there was something off about Rod and now I realise it was his ‘Tom Hanks in Inferno’ inspired wardrobe.

This revelation has sent shockwaves through the school. “Being a teacher is all about credibility, and no high school student is going to respect their English teacher if he enjoys novels with chapters that are only two pages long,” stated Morrison. “But seriously,” he continued, “I can understand going to bed with a copy of The Da Vinci Code – that was a worldwide sensation with which we all had a guilty, sordid one night stand – but snuggling up with The Lost Code in paperback? That’s just sick, especially when I see he had a perfectly good copy of Nabokov’s classic Lolita in his collection.”

After Jankin’s was unceremoniously excused from the meeting, the remaining English teachers returned to fiercely debating which novel should be added to the newly revised Year 8 curriculum: Twilight or Fifty Shades of Grey.