loading...
General News
Malcolm Turnbull burns down 5G tower over fears it could cause fast internet
1st of your 1,000,000 free articles this month 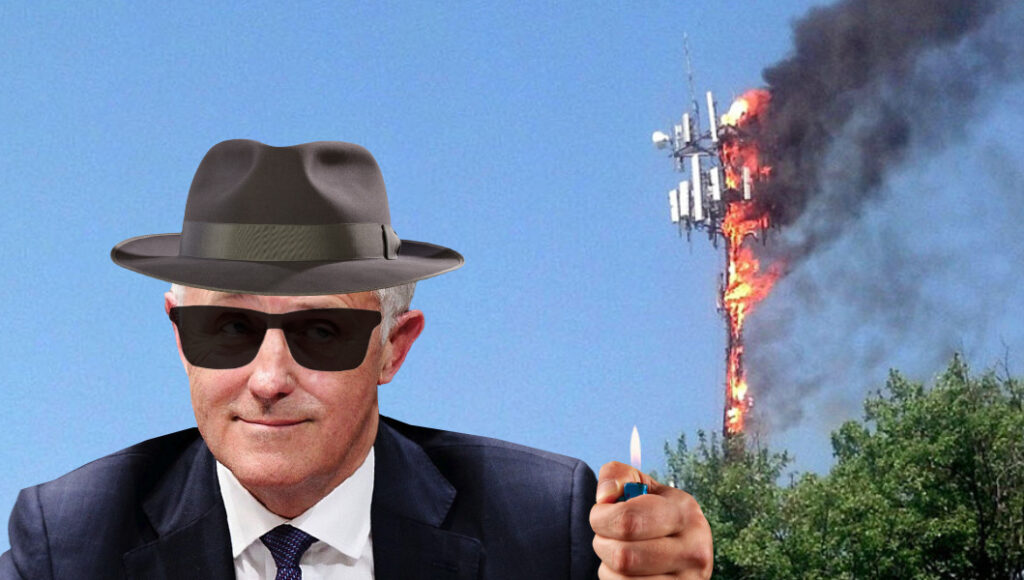 Former Australian Prime Minister and World-Leading-Psychic-But-For-Events-That-Have-Already-Passed, Malcolm Turnbull, was arrested this morning for allegedly burning down a 5G tower erected on the outskirts of Sydney.

The Potts Point IT millionaire was reportedly fuming that the globalised telco market has found a way to deliver rapid-speed internet to all Australians, without squandering billions of dollars of taxpayer money and then blaming the debt on a tiny minority of refugees escaping violent warzones.

Asked whether Turnbull’s actions would affect the planned rollout of the 5G network, a Telstra spokesman said they company was still well on track to provide complete coverage to various specific corners of livingrooms across Australia. “We’ve got our technical guys on the ground,” he explained, “and thankfully the truffle oil Mr Turnbull used has a low smoke point so no damage was done, meaning we’ll still be able to progress ahead with our total monopoly on the Australian market.”

“Ironically, we’d like to thank the handful of Byron Bay Vibe Specialists who reported the incident, after the smoke from one of Turnbull’s flames prohibited them from destroying another tower only 200 meters away,” said the spokesperson.

The group chastised Turnbull for choosing fire as his method for destruction, citing its contributions to Australia’s overwhelmingly poor record with climate change, before all taking a 2 hour smoko to refresh their vibes. The Byron locals instead invited Turnbull to join their method of using quartz crystals to simply dispelling 5G’s ‘negative vibes’.

The Chaser has reached out to the Former Prime Minister for comment; however, he has declined the opportunity, stating that ‘all will be revealed’ in his upcoming six-part series of interviews to be streamed via near-dial-up-speeds on Netflix.