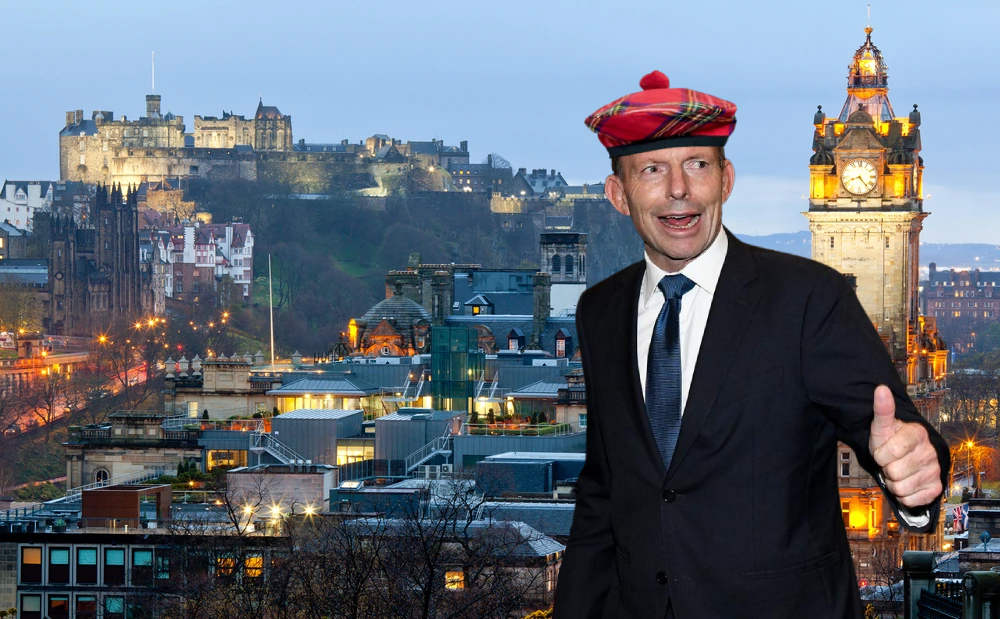 Former Minister for Women and guy whose budgie smugglers are always sure to get a reaction from the laddies, Tony Abbott has today been spotted walking around Scotland after apparently deciding to move there following the announcement that the Scottish government will be making period products readily available for free around the country. Scotland has drawn international attention by being the first country to make these crucial products free in order to tackle the growing issue of ‘Period Poverty’ in the year 2020, instead of doing it earlier, like say when experts decided we needed a term for ‘Period Poverty’ for example.

Tony Abbott made a statement to the press earlier today about the move, while standing between two women who are almost managing the impossible task of looking like they want to be there:
“I am proud to make this my new home while I help usher in Brexit. This could help the women of Scotland not waste money that they could be using on a new ironing board. While a long time ago in the past, back in the historic year of 2018, I may have said that removing a luxury items tax on tampons was ‘stupid PC nonsense’ but I am all for this. The support we as a people get from women is truly the bleeding heart of any nation, and this nation has decided to support women with their bleeding unmentionables. Now we hopefully won’t have to discuss such vulgar and shameful things anymore.”

“What the housewives of this nation need to understand as they get their husband his sandwich is that this is a big deal. In order to help out and show my support for women, I have decided to give myself every one of those… umm…. things I have been able to find. This will help women not get stressed out by the idea of having your husband drive you out to get one of these luxuries. Now women, this is sadly not the end of your struggles, but First Minister Nicola Sturgeon has somehow managed to come up with a good idea for helping women’s needs. Now while the idea is good, imagine how much better it would be if a man was in charge around here.”

In response to this Scotland’s First Minister Nicola Sturgeon spoke out publicly, saying:

“Oh wow, and this is the guy Boris says is not too sexist to represent post-Brexit Britain? Ok well I would just like to say, Boris we want another referendum to leave the UK ASAP! The faster we can ditch you guys, re-join the EU and get this guy the fuck out of our land.”