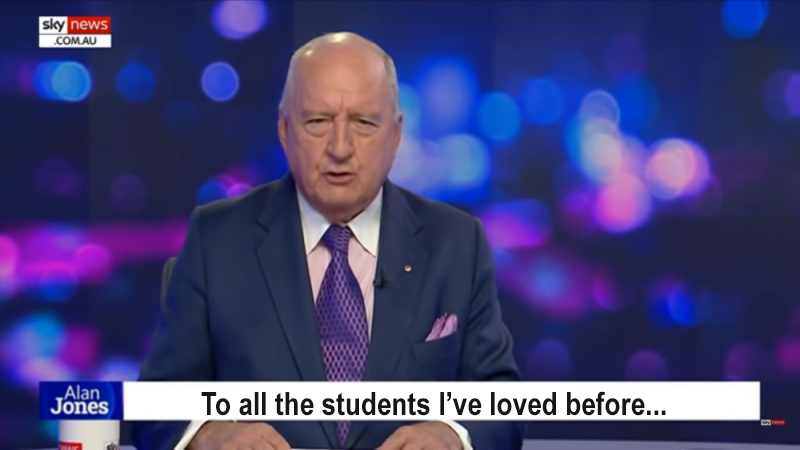 Former teacher Alan Jones has voiced his concern to Sky News viewers that school teachers are ‘inappropriately’ teaching kids about issues such as climate change, gender or that “Donald Trump’s going to blow up the world”. Alan expressed concern that these issues distract from the most ‘basic’ part of education; ‘writing in cursive’ and that print writing ‘isn’t handwriting’.

The lack of cursive writing from school age students can be distressing because if kids aren’t used to reading and writing in cursive, they might struggle to read the love letters they are given by groomers.

“How are students supposed to learn from their teachers if they can’t even read their love letters?” asked the former teacher. “Students these days aren’t having a proper education anymore. Someone needs to step up and teach these students, and since no one else will I guess I will, if I have too. I would be happy to get in touch with the young students.”

“Students are being taught about things climate change, gender and that racism is ‘bad’. How will any of that assist them in the future? Have schools ever taught about leaders like Trump and their attempts to cling onto power as they fight an anti fascist movement? Also climate change, what about things that will actually be an issue for them in the future. What good will learning about climate change be if they can’t children can’t even write a goodbye poem to the man they are in love with on a piece of paper, before dying to whatever natural disaster is about to hit?”

“Handwriting has been completely abolished. The Education Department claim that kindergartners are learning handwriting but they aren’t, they are learning print writing! Sure the scientists claim both work, but scientists are also the ones who claim climate change is real so you can’t trust anything they say.”

“Could you even imagine receiving a love letter written in print? It would take all the romance right out of it, no matter who the child is. School teachers should be teaching students that adults exchanging love letters with a child with poor handwriting is just wrong. You should always be able to write neatly.”

In response to his criticisms, the teachers who can still pass a working with vulnerable people check have said, “This is great news. It would be a real cause for concern if someone like him was telling us that everything we do with students was appropriate. You can tell you are doing something right when Alan Jones complains about you.”