loading...
General News
The Chaser’s Guide to Modern Journalism
1st of your 1,000,000 free articles this month 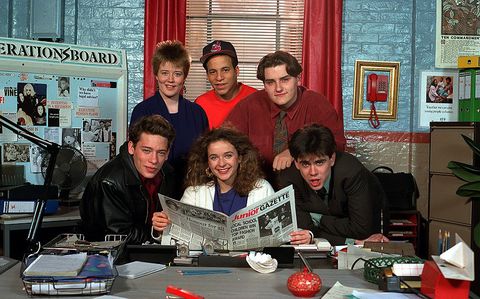 It’s a hard-knock life being a journalist these days. But with grit, determination and a healthy trust-fund account from your parents, anyone can make enough spare change on the side of a proper career to be able to call themselves a journalist.

Modern journalism is all about having another source of income to rely on. Whether it’s dealing drugs, prostitution, or, worst of all, writing for News Corp, success requires you to diversify away from the one thing that is now proven to not make any money: journalism. Nowadays being a ‘journalist’ mainly involves re-writing Wikipedia, and passing on information you read somewhere else. Anyway, you’ve racked up the HELP debt for that Bachelor of Journalism or whatever, so you may as well make the most of it.

How to write a balanced article (balance an expert with an idiot)
Unless you’re being paid to write an op-ed column, your articles must be as exquisitely balanced as the scales of justice. It’s vitally important to show both sides of the story, no matter how obvious the ‘correct’ side is. You are a dispassionate recorder of current events. This means that if you ask a so-called expert for their view on a given topic, you have to ask an idiot too.It sounds like hard work, but don’t worry. As soon as you start sharing your published pieces on social media, the idiots will contact you. On the other hand, if you are writing an op-ed column, feel free to spray whatever’s in your heart without the slightest bit of research. No one can fact-check an opinion. Make sure you refer to anyone you disagree with as a ‘snowflake’. They think they’re precious and unique but they are actually fragile, and it’s not a reference to the colour of their skin, as you accuse them of fraudulently taking government funding and benefits as an Indigenous Australian.What other sides to a story are there, other than the true one?

Before you finish your article, it’s important to have all the facts at your disposal. This doesn’t mean, however, ‘things that actually happened’ is your only source of information. Ask around Google the topic of your piece and see what dissenting opinions pop up. Remember, quotes are great for filling out a word count, and as long as you link back to the original source you’re good to grab as much direct speech as possible. After all, if someone says something in public, that makes it public domain. Anyway, you should be treating every story as though it was a journalistic Rashômon. If it’s about coral bleaching in the Great Barrier Reef, grab a quote from an Adani spokesperson, a local surfer, Tony Abbott and the owner of a scuba diving company (doesn’t have to be a Queenslander, obviously). That way, you’ll have plenty of words to put on the page, without having to pass judgement on anyone’s opinion. That’s for the reader to decide. And, well, the subs who fact-check the piece, write the captions and headline. Hahaha-hahahaha…

Good sources of information, versus elitist ones
If you want to be known as a brilliant writer who leaves a gasping, select audience of hand-picked readers in awe with every dripping jewel of crafted prose, go write an allegorical novel about a clumsy vixen’s sexual awakening at the hands of a smooth-handed scribe, or become a columnist for The Monthly. Most normal readers don’t give a shit about your throwaway references to fin de siècle political movements or Kurosawa films or what Ben Chifley would have thought about all of this. That goes double for your sources. Don’t be a goddamn elitist. No one likes it, and no one clicks on it. Here’s a handy guide to sourcing your material.

YOUR UNCLE AFTER FOUR WOODSTOCKS: GOOD
A FEDERAL POLITICIAN: BAD
Ask yourself this: who’s going to be better informed about what’s going wrong with this once-great nation? Your uncle, who spends all day trawling through a huge variety of Facebook groups dedicated to the pure love of Australia, or some bastard politician who’s robbing pensioners to pay queue-jumpers to take jobs from disabled battlers who shouldn’t be on welfare in the first place if they’re able to join a protest march against our brave boys fighting ISIS so that every child of the Southern Cross can continue to celebrate Australia Day on January 26 as God and Captain Arthur Phillip intended, no matter what this smart-arsed Andrew P Street bloke your cousin keeps sharing on my bloody wall just to stir me up – and it’s not bloody working mate, trust me – might have to say about it? Fair dinkum, more dollars than sense, some people.

MAN IN THE STREET: GOOD
ANDREW P STREET: BAD
There’s a reason that we talk about political ideas passing the pub test. It’s because the man in the street is a very good judge of what’s bullshit. Fairfax columnist Andrew P Street, on the other hand, is an Adelaide-born elitist who only pretends to like Barnesy and sneers at your greatest hits albums. Don’t quote him. Unless he’s standing in the street. Or a pub, I suppose. Actually, this is a grey area.

A CLOSE FRIEND OF THE COUPLE: GOOD
THE PERSON WHO ACTUALLY SAID IT: BAD
This one’s specific to gossip mags, mostly. You might think it’s more hoity-toity to throw around anonymous sources, like you’re Woodward and Bernstein grabbing confidential information from Deep Throat or whatever (I never got to the end of that film), but really, it’s way more elitist to name-check the people who are so close to a celebrity couple on the rocks that they know the intimate details of their trainwreck relationship, but not so close that they wouldn’t anonymously sell out said couple in the glossy pages of some scandalous publication. As an unrelated serendipitous bonus, it’s heaps harder for Bec and Lleyton to sue if they don’t know who said all that shit about them.

WIKIPEDIA: GOOD
ANYTHING ELSE: BAD
If the boss is riding you, I suppose it’s okay to click on one of those footnotes to see where the info originally came from, but seriously, Wikipedia’s laden down with editors who are hyperfocused on ensuring the correct information is present and correct in Each entry. Plus, it’s all free so you don’t even have to say ‘according to Wikipedia’ when you’re presenting the facts of the matter. It’s a given that it’s from Wikipedia.

This article first appeared in The Anti Experts Guide to Everything (CQ8): buy it here.