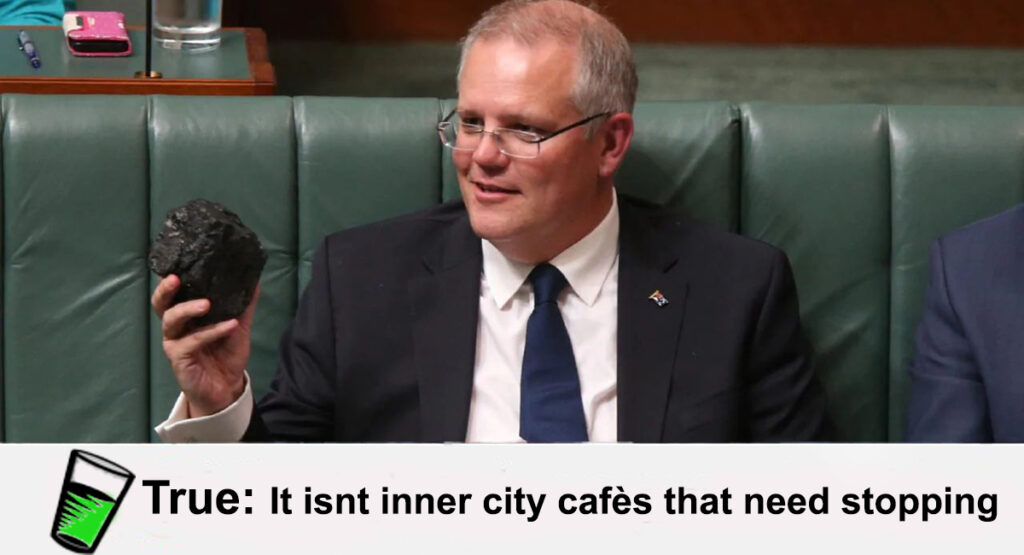 Inner city elite and the burnt flat white of Prime Ministers Scott Morrison has come under fire today after claiming that “we will not achieve net zero in the cafes, dinner parties and wine bars of our inner cities” while speaking at an exclusive dinner party for rich inner city elites.

Our fact-checking department consisting of whoever the least drunk person still working is has worked tirelessly to check if random cafes and wine bars can offset all of the rest of the country’s carbon on their own and came to the conclusion that ‘no, no they cant’. Meaning that shockingly the PM has actually told the truth, good job Scomo! Who knew he had it in him? He was bang on the money with that one.

Yes, despite the KeepCups that are growing in popularity at coffee shops thanks to the people who somehow manage to make saving the planet feel ‘a bit much’, your local coffee shop will not be able to offset the damage caused an industry that neither major parties have plans to limit in literally any way. Sorry hipster coffee shop owners, unless you can somehow manage use your beards to convert CO2 into oxygen like a tree, you aren’t going to save the planet on your own.

Instead both parties have made serious commitments into making vague commitments into researching and developing cleaner energy in hopes that will somehow undo all the damage our country does to the world and ‘protect our economy’ from the ‘future damage’ that would allegedly be caused by reducing investment into an outdated resource with dwindling demand which doesn’t bring in any tax money, employs a small percentage of our workforce and could soon lead to import tariffs from all of our major trade partners. Plans that are so solid we can only assume their back-up plan is to just start burning literal Aussie cash as a fuel source instead, which would only be ‘Plan-B’ because it would involve hurting Gina’s bank account.

Our fact-checkers did also examine his claims regarding net zero pollution not being achieved through government policy but instead is solely up to industry and scientists to be “more disingenuous bullshit from a man who clearly cant even take responsibility for his own shitty ties at this point. Just do your fucking job well for once in your fucking life! You want scientists to do more? Stop giving your mates Gina and Rupert tax-payer money while they work against science, you Boris Johnson wannabe!”