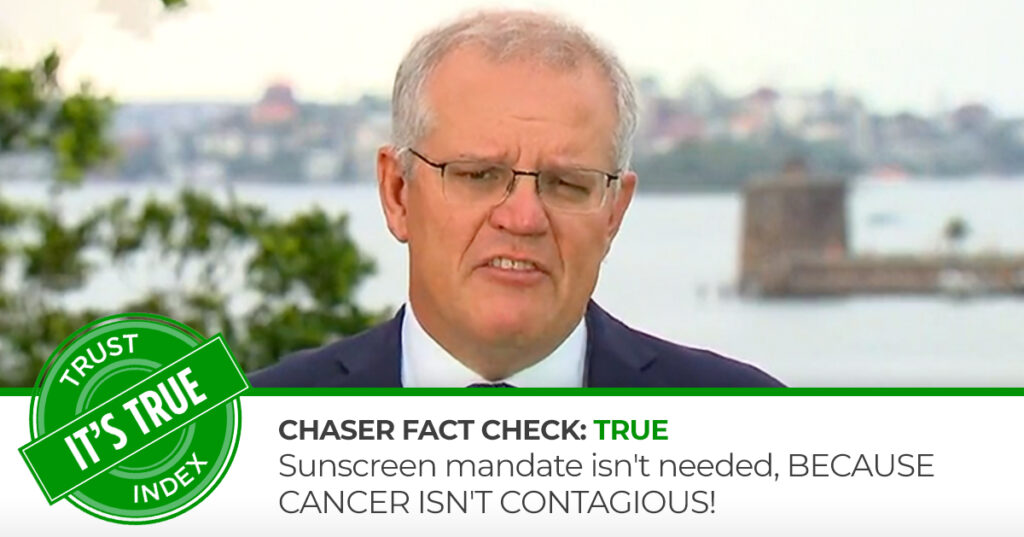 Prime Minister Scott Morrison has come under fire recently for telling the Today show that we don’t need to a mask mandate, in the same way we don’t force people to wear sunscreen. In a rare phenomenon that many thought impossible, Morrison actually managed to tell the truth there.

In an unusual moment of factual based analysis by the man in charge of the country, Morrison was correct in his assertion that a government mandate sunscreen is not necessary as skin cancer is actually not contagious, as opposed to some kind of airborne virus, like say the Omicron variant of Covid-19.

Both do require everyone to protect themselves and should be taken seriously, however only one also serves as a threat to others. It would be like if a sky-diving instructor decided not to bring a parachute and then blamed the person strapped to them for not protecting themselves.

This crucial factor is one that anyone who isn’t a complete selfish asshole would understand, for that reason it makes sense that Scott Morrison didn’t understand it.

However our team also fact-checked Morrison’s follow-up claim that this means that there is no need to enforce public health measures, for which the verdict was: “Are you fucking kidding me!?! We’ve had almost 2 full years of Covid but apparently the king of Hawaii has learned f-all about basic human decency in that time, no matter how much money we waste on his empathy consultant. How did we reach a point that this isn’t shocking anymore? Like we knew the anti-ICAC guy wasn’t going to want actual accountability but still for fucks sake, can he at least not act like such a huge Greg Hunt!”