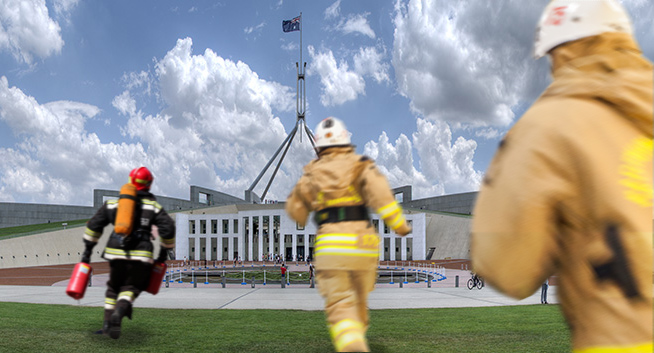 The Australian government has today recalled firefighters across the country from whatever it was they were doing and ordered them to Canberra, where they will be on the front lines in the battle to get the Religious Discrimination Bill through parliament.

In a press conference this morning, Prime Minister Scott Morrison has called for calm, trying his best to comfort a nation increasingly worried about businesses being forced to serve baked goods to same-sex couples. “A fleet of at least thirty firetrucks is expected to arrive at Parliament House by this afternoon. We’ve also been lucky enough to receive assistance from volunteer firefighters from Uganda, Russia, Kentucky, and the Vatican.”

In between pained coughs and splutters caused by totally normal weather conditions, the PM detailed the grim task ahead of the firies: “Once they get into the building, they will be right into the thick of it. The sheer amount of Labor and Greens senators still active are proving incredibly difficult to put out, and in conditions like this, there’s every chance of a Centre Alliance or One Nation sparking up with some last-minute amendment.” Aerial support is on stand-by, ready to dump many tons of fresh pork-barrelling onto the chamber if needed, but it will likely be weeks until the crisis eases.

When asked whether the firefighters’ efforts might be better spent combatting the many bushfires blazing around the country, the Prime Minister was taken aback. “Bloody hell, you people are still on about those?”