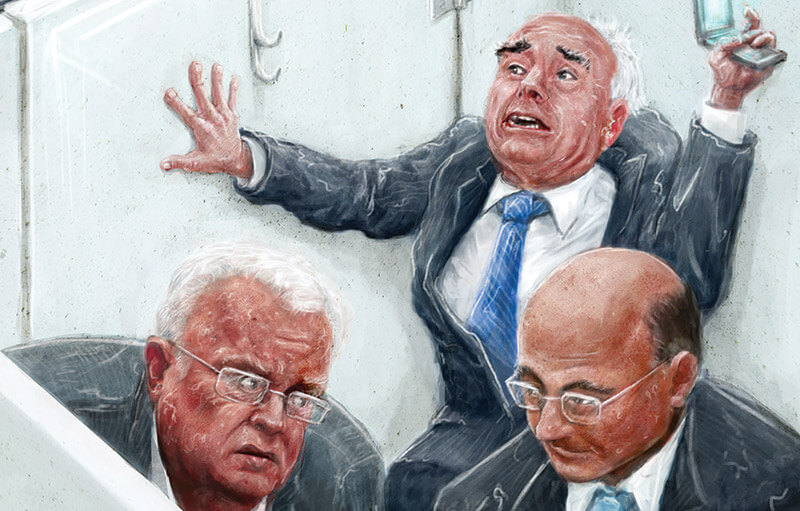 In 2004, John Howard was returned to office to serve an historic fourth term as Prime Minister, convincingly beating Labor rival Mark Latham. However, for the first time, The Chaser reveals the story behind Howard’s stunning election comeback.

It’s 9:30 on the evening of Saturday 9 October, 2004. John Howard walks onto the stage at Sydney’s Wentworth Hotel to declare victory in his fourth straight federal election. “I am truly humbled by this extraordinary expression of confidence in the leadership of this great nation,” he says, to roars of approval.

But it’s all an act. An elaborate hoax. A fix. The truth is, Howard never won that election. Mark Latham won it. Convincingly.

Only a few people have known what actually took place on October 9. Howard’s Chief of Staff Arthur Sinodinos; Labor powerbroker Graham Richardson; then first-time MP Malcolm Turnbull; some guy from the Australian Electoral Commission and Howard himself all knew. They’ve guarded the secret carefully, until now.

Sinodinos got pissed after an ICAC hearing last year and boasted about the whole episode to one of his mates. We secretly recorded the conversation.

“So it’s about 4pm on election day and the numbers are looking really bad for us. The exit polls are saying we’re heading towards a bollocking, which means Latham is hours away from becoming PM. Can you fucking imagine? Mark Latham! Then I get this panicked phone call from Graham Richardson, would you believe. ‘We’ve got a problem,’ he says. ‘Latham is about to fucking win.’

Anyway, Richardson confirms that he is, in fact, a Labor man, but that they don’t want Latham to win. Can you believe it? They actually don’t want him to win. He’s a liability, they reckon. He’s crazy.

‘I know he’s crazy,’ I say. ‘He came up to me out of the blue last week, took my glasses off my face, cleaned them, then broke them in half,’ I say to Richardson.

‘Oh that, no that was my idea. It’s just a prank we play on Liberal staffers,’ Richardson replies.

‘Oh, right,’ I say. ‘Well the week before that he came right up in my face, got out a polishing cloth and started polishing my head, and then said he was going to crush my spirit with his bare hands.’

‘No, no I don’t think you understand,’ Richardson says. ‘He’s properly nuts. The guy’s not all there. He is unstable. Just to give you an example, he came into my office the other day, pulled down his pants, and then started urinating on the pot plant in the corner – said ‘it needed a water’ – and then …’

‘What? No, that’s not the story. That’s just how we start meetings in the Labor Party. No, the crazy part is, he pulls up his pants, sits down and then says (and I’m quoting word for word here) that there is no longer a place for factions in the Labor Party. No place at all he reckons! And he wants to be running the place! Like I said, total nutcase.’

Anyway, so Richardson goes on to say he wants to rig the result. Put together some sort of ‘arrangement’. Says we need to meet straight away to discuss the details. Somewhere discreet. Says he knows just the place.

Half an hour later I’m standing in a cramped toilet cubical in the Wentworth Hotel bathroom with Graham Richardson, John Howard and some other guy I’ve never seen before.

‘This is Bruce from the Australian Electoral Commission. We’ve um, let’s just say we’ve done some work together before,’ Richardson says, gesturing to the man.

‘Great, so we all know each other then,’ Richardson says.

There’s an awkward moment when Richardson manoeuvres himself into the space between the toilet bowl and the side cubical wall trying not to tear his pants on the toilet roll holder. Then he says, ‘Let’s get down to business.’

He called it a ‘gentleman’s agreement’. ‘We hand Government to you this time, and then, in three year’s time you hand it over to us. By then you’ll have been PM for 10 years or so John, you’ll be ready to move on. It’ll be a very smooth transition.’

And then, at the very moment Richardson says ‘smooth transition’ we hear these footsteps walking past the cubical, and a voice calls out ‘Who’s in there?’

There’s a very tense couple of minutes while John pretends to go to the toilet. He tears the toilet paper off the roll, scrunches it up, shifts from side to side on the seat and makes a plopping sound. Then Peter finally leaves.

‘Very, very fucking close,’ Howard says. ‘Do NOT under any circumstances say ‘smooth transition’ again, Costello might come back. Anyway, so you were saying we just hand over to you guys in three years. Sounds fair. Do you have someone in mind?’

‘Who the fuck is Kevin Rudd?’ John and I say.

‘You know, that quiet, geeky guy with glasses. Into China. Quite the opposite of Latham. He’s a really level-headed bloke, a steady hand. You’ll like him.’

We squeeze ourselves out from our positions around the toilet and begin to walk out of the cubicle when a small voice says, ‘Um, small problem.’

It’s the AEC guy. We’d forgotten all about him. Poor guy was perched up on top of the toilet cistern, ducking to avoid hitting his head on the ceiling.

‘It’s now 5:52pm,’ he says. ‘In less than 10 minutes the AEC central computer will start feeding results to the TV stations. Within an hour, Antony Green is going to be containing his hard-on while saying ‘Labor landslide’. Any bright ideas on how we’re going to rig an entire election?’

‘Oh brilliant John. And you have someone in mind who might know how to do that?’ the AEC guy says. Sarcastically, I think.

There’s a moment of silence, and then Howard and I say at the same time, ‘Turnbull.’

‘What’s Turnbull going to do?’ the AEC guy asks.

‘And he’s running for parliament for the first time, so he’s got skin in the game,’ I say.

‘I don’t think it’s as simple as that,’ the AEC guy says.

‘I’ve got him on the phone now,’ Howard says, gesturing to us to be quiet.

Howard quickly explains the situation to Turnbull while we wait nervously around the toilet bowl.

‘He can do it. But he wants something in return,’ Howard says to us, covering the phone with his hand.

‘Can we offer him the PM job after Rudd?’ I suggest.

‘Nah, I owe a favour to Gillard,’ Richardson says.

‘And I’ve made a promise to Abbott,’ Howard says. ‘But maybe after that?’

We all nod in agreement.

Howard speaks to Turnbull again. ‘We’ve got a few people in line in front of you mate, but if we give everyone two terms, we could have something for you in 2025.’

‘I can speed things up from my end, cut it down to a term each,’ Richardson says.

This is an extract from Chapter 12 of The Completely True History of Australia.