National
Libs roll out the ol’ minority dartboard to decide who’s getting shafted in 2018 budget
May 7, 2018

WRITTEN BY
Angus Thompson
For The Chaser 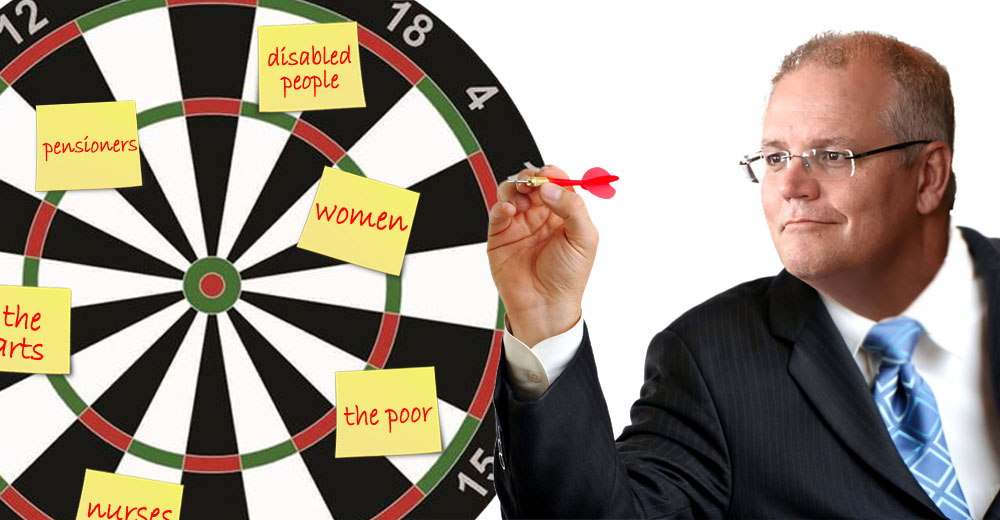 The LNP partyroom has today once more partaken in what has become a time honoured tradition on budget day, by rolling out the ceremonial Liberal Party Minority Dartboard in order to officially decide which minority group will be getting completely fucked in this year’s budget.

Dressed in their ceremonial white armbands, members of the party solemnly wheeled out the dusty and pockmarket dartboard, now completely covered in post-its naming various minority groups – added during the short but eventful Abbott ministry. “Originally it was just a few post-its naming the usual groups, you know women, the ABC, public education, nurses and just one dart.” says Liberal Party spokesman and part time vampire James Patterson. “We figured we’d at least give them a fighting chance. But since the Abbott government revolutionised the budget process we’ve added over 100 more underfunded groups to the board – from the climate council to the Australian Ballet, as well as 100 more darts.”

“The dartboard strategy has really helped us look like sensible economic managers since the old plan of selling off every single asset that wasn’t bolted to the ground dried up,” says Liberal Treasurer Scott Morrison. “Just three more cuts to various wildlife protection funds and we’ll be able to give the big banks another tax-break they so clearly need.”

The ceremony was followed shortly after by the traditional wheeling out of the second dartboard used to decide who would be benefiting from the budget of the year. Featuring nothing but a A3 photo of Rupert Murdoch, members once again took turns each throwing a rose at the picture, before unanimously deciding to just leave a truck of unmarked dollar bills outside News Corp headquarters.