WRITTEN BY
David M Green
For The Chaser 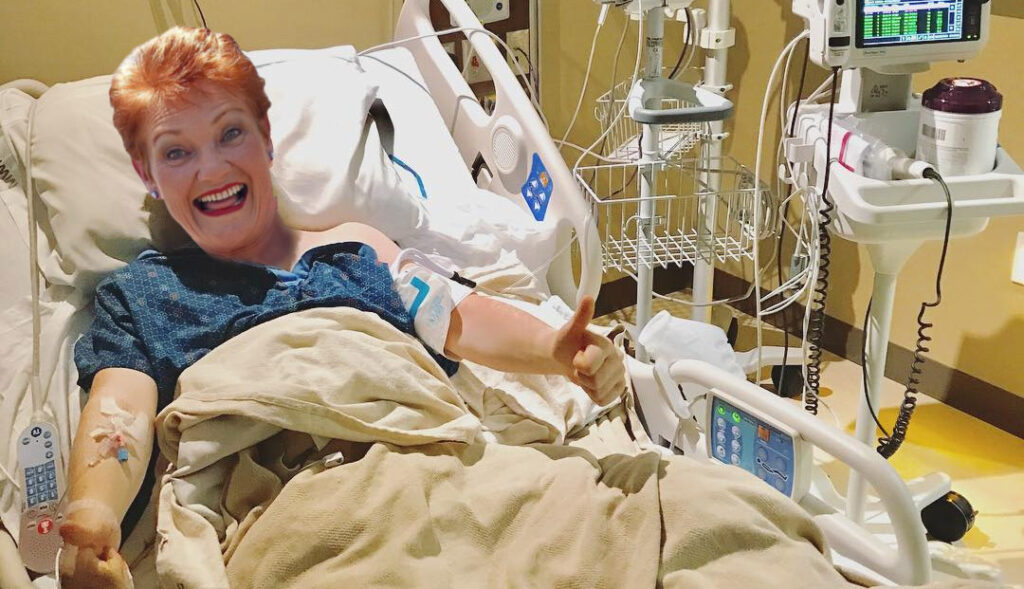 Breakfast TV’s favourite white supremacist and famed Pauline Pantsdown impersonator, Pauline Hanson, has today been rushed to hospital, after she collapsed in a fit of ecstasy after being told that all travel from China had been banned.

“I just want to thank everyone who made this moment possible,” said a teary Pauline as she was rolled into an ambulance. “I want to thank God, I want to thank my supporters, but most of all I want to thank the Corona company for making a beer so strong it can kill you. I never knew they had it in them.”

Asked whether her joy at hearing about the Chinese travel ban has more to do with her hatred of all non-white people than a genuine concern for public health, Mrs Hanson said nothing could be further from the truth. “I reject any claims that I am a Xylophone!” said Mrs Hanson, “I assure you my only concern is for the public’s health, why else do you think I’ve spent all these years arguing against vaccinations?”

“The only illegal alien I am afraid of is Malcom Roberts. God that guy’s creepy.”

“In fact I’m so concerned about public health, I’m even releasing my own brand of facemasks,” continued Hanson. “These full face, white, triangular facemasks are made of the finest bedsheets, and are sure to ward off all kinds of nasty invaders into your otherwise pure bloodline.”

Hanson was later released from hospital after refusing to take an X-Ray, over fears they might give her bone-autism