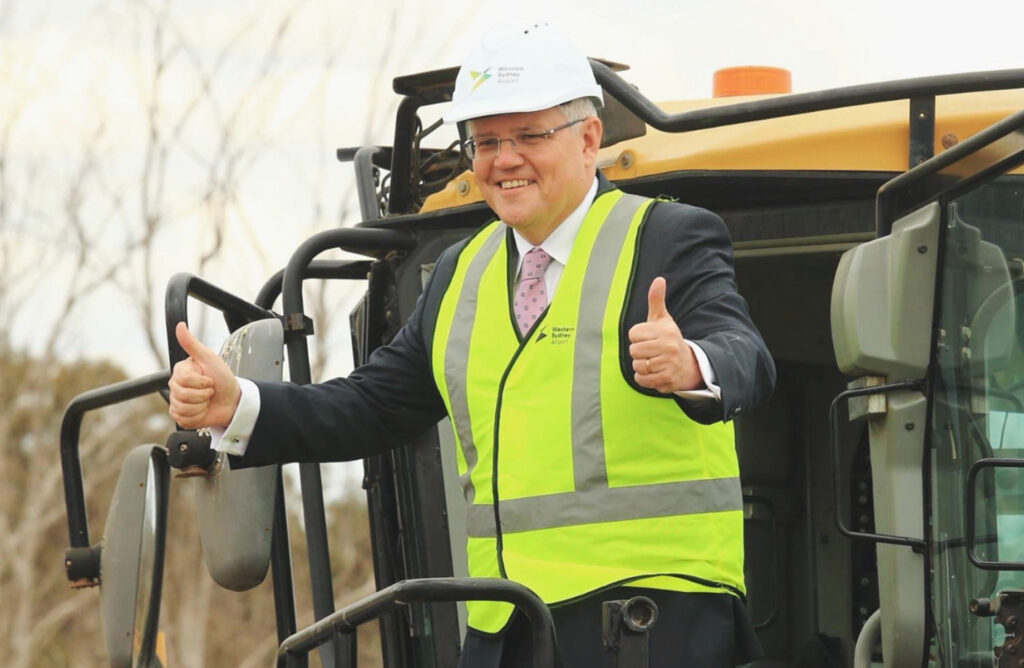 Guy who tries to seem like a ‘typical Aussie bloke’ despite being the embodiment of wearing a Ralph Lauren sweater over your shoulders, Prime Minister Scott Morrison has defended the government paying $30m for land valued at $3m for the Western Sydney Airport.

“Ol’ Mate Scomo” as his PR team requested we call him, clarified in an exclusive interview with The Chaser that he was in fact “just paying mates rates” and that the dealing involved “many other common blokey shenanigans”.

“Yeah nah mate, it was just a handshake deal,” said the Prime Minister while angle-grinding a flat-pack shelf wearing white chinos and a Sharks jersey he just had dry-cleaned and pressed. “It was just a typical mates rates deal you see. Deals like these are very common around Australia, especially within our government. I mean just look at the recent gas investment, the money we constantly give to Rupert, or even all the money we gave Angus Taylor’s mates for that water which will probably come eventually. Internally we even call our tax rate cuts for millionaires ‘mates rates’ cause that is essentially what they are. How great are mates rates?!”

After a brief interruption by Mr. Morrison’s manservant who came in to remove the PM’s first ever splinter, Scomo had more to say about the auditor’s findings. “To the auditors who raised concern about the repeated reference of the “goodwill” between us and the seller throughout ‘negotiations’, and that we didn’t get a second opinion of the value of the land, I ask, have they never done deals with mates before? Typical elites don’t even understand how the real world works. Of course, I have goodwill with me mates, that’s how mates work! At least that’s what my PR team told me. You don’t dog the boys by getting someone else in even if it might be slightly more expensive. I mean what’s $27m between mates?”

“Also, all this crap about ‘not showing any benefit to paying for the land decades before we plan to use it’, um how about helping out a mate? To suggest that a mates rates deal was unethical is bloody Un-Australian! Hell I even offered to pay in $30m worth of cases of beer!”

In response to the renewed calls for a Federal ICAC, the Prime Minister had this prepared statement to read out, “Oh come off it mate. We don’t need a Federal ICAC, stopping being such a snitch.” After concern that his PR team hadn’t prepared him enough on the matter, he continued completely unassisted saying, “Heavens to Betsy, I shall hear no more of these allegations of tomfoolery and humbugging. Anybody who persists with these actions against us are men without valour or honour, without valour I say!”