loading...
National
ScoMo moved from emergency exit row seat after refusing to assist in event of disaster
1st of your 1,000,000 free articles this month 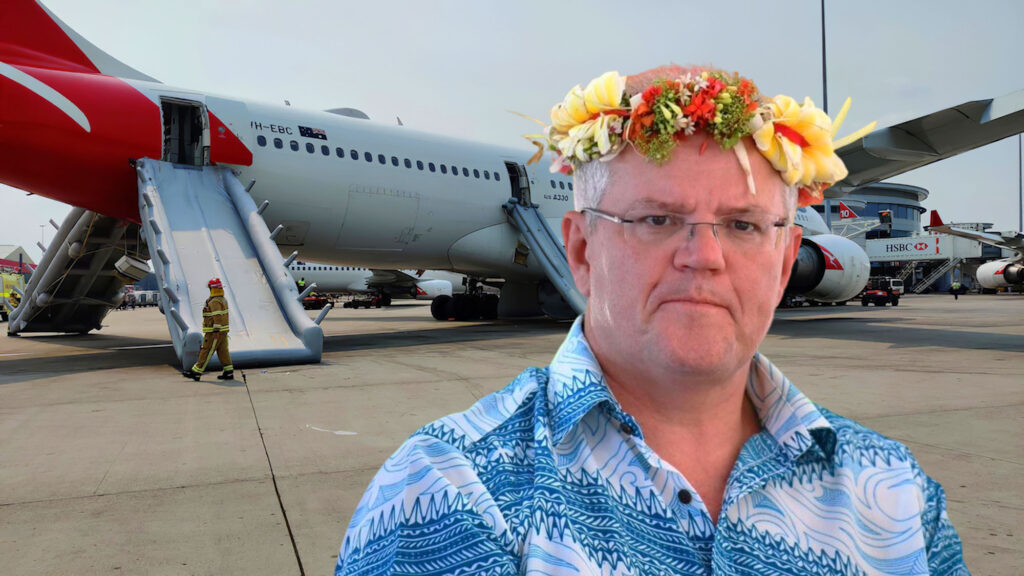 New reports are flooding in today suggesting that part-time Prime Minister and full time national disaster Scott Morrison was forced to move seats on his return flight from Hawaii, after he told airline staff that he would not assist fellow passengers in the event of a disaster.

Originally having requested the seat closest to the emergency exit, in case he found himself needing to flee from questions about his $100,000 government grant to Hillsong church, Morrison was moved to the back of the plane by staff after he told them he would not be helping any fellow elderly or disabled passengers should the plane catch on fire. “Why would I do that?” asked Morrison, jamming his carry-on lump of coal into the overhead locker. “If they didn’t want to be on fire, why would they book seats in the smoking section of the plane? I’m sure they want to be there!”

However, moving Morrison proved fruitless, with the Prime Minister still refusing to allow staff to access the fire extinguisher situated behind him after an in-flight meal caught fire. “I’m moving at a canter,” said Morrison as he sat fixed in his seat. “Yes I may be sitting still, but the plane is moving at 1000km an hour, so technically I’m meeting all targets required of me.”

“God, can’t a bloke take a holiday,” sighed ScoMo as frantic passengers attempted to climb past him as the plane slowly filled up with smoke. “Can’t you people see I’m trying to relax here! Enough with the shouting, why can’t you all be more like the quiet Australians?”

UPDATE: Morrison has finally agreed to help fellow passengers, with the Prime Minister ordering an emergency deployment of thoughts and prayers to everyone affected.