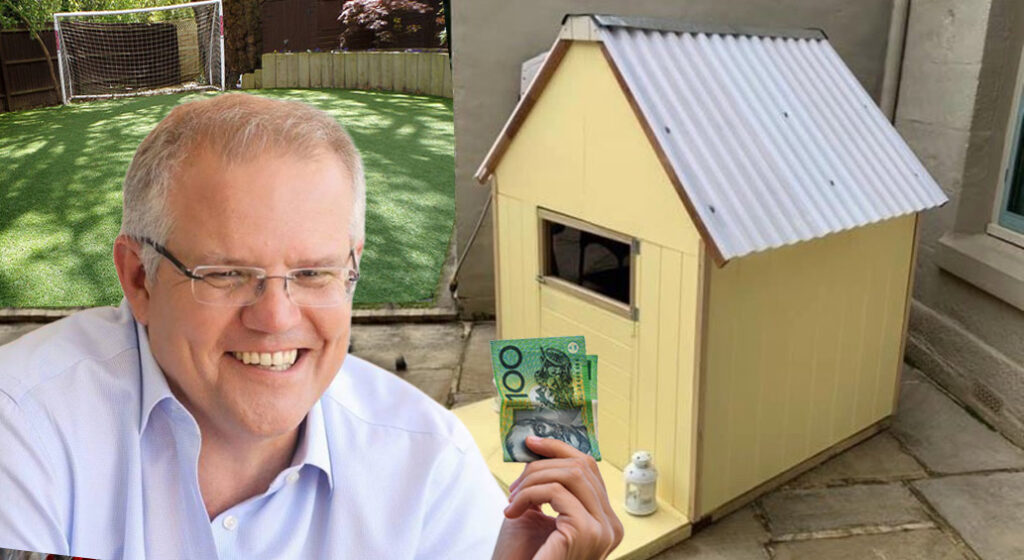 Prime Minister Scott “Who” Morrison has today confirmed he is a financial genius, after taking advantage of all available tax breaks for the cubby house he built in his backyard.

“I borrowed $1000 for this investment cubby and I’m currently charging children $5 each time they play in there,” explained Morrison. “That’s a net loss. Why shouldn’t I take advantage of the perfectly fair and not-at-all-favouring rich pricks system to make a few extra thousand dollars?”

Negative gearing is a situation in which homeowners claim tax relief if the income on an investment property is less than the outgoings and never shut the fuck up about it. It has been confirmed, through a series of tortuously obtuse arguments, that it may not adversely affect the ability of young people to get on the ladder, but also probably does.

“Look the fact is this is technically a second dwelling, and also an extension on my house, and also technically my daughter’s first home, so I’d be foolish not to use the tax breaks available to high income earners like myself,” explained Morrison after being asked a completely unrelated question about the arts relief package. “I mean, I can hardly help the fact that the law is the way that it is. Just because I wrote and voted these laws into existence doesn’t mean us politicians are only thinking about ourselves. We also look out for our billionaire donors!”

Holding $15 and watching his daughter and two friends sit in the bare wooden structure, Morrison became pensive. “Time goes by so quickly,” he said. “Before we know it these little ones will be gifted the deposits for their own investment properties, and begin negatively gearing them all on their own. I don’t know why more of these lazy millennials don’t think to do that.”

A source inside the Prime Minister’s house has revealed that the Prime Minister is also seeking to classify the dog house in his garden as a dwelling, and would then get the loan to value ratio as high as possible before renting it out to three students as a “cosy bedshare”.