loading...
National
Scott Morrison claims he is “handy with tools”, citing years of experience with Tony Abbott
1st of your 1,000,000 free articles this month 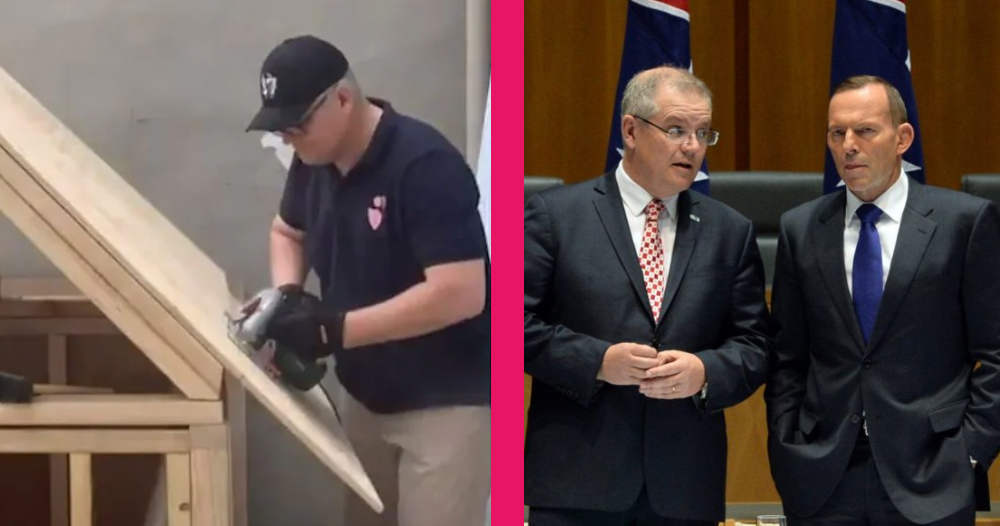 Handy man who sadly still hasn’t managed to DIY a fix to the aged care crisis, Prime Minister Scott Morrison, has today uploaded a fun video of himself making a cubby house as the nation slowly collapses in on itself. The Prime Minister, who still hasn’t deployed arts industry rescue package three months after it was announced, used the opportunity building the cubby house to show off that he is great at working with his hands, like when he wraps them around the arts sector and slowly strangles it to death.

“How great is DIY! I’m great at working with tools,” beamed Morrison in a brazen attempt to win over orange collar voters, “Just have a look at this cabinet I built using some of my favourite tools – like Joyce, Cash, McCormack, Taylor. And also a spanner named Peter Dutton. All the ingredients were ethically sourced from my old crumbling front bench too!”

“I love it, I do handy-work all the time now that I know that’s a thing people who are too poor to buy a new house every time there is a crack in the wall does. It feels so good to actually do something productive, I haven’t done anything in years. When my daughters wanted to do something with their daddy, I thought what better than make a cubby house and video it so I can use it to gain support. I mean not everything is about politics of course, but the key to good marketing is to manipulate those situations into ways to garner support.”

While of course Morrison should not be shamed for spending quality time with his kids, some have questioned the choice to spend a large amount of time on a project and brag about it on Father’s Day while many Aussies are unable to see their fathers. Morrison responded to those critics saying that he was simply doing what any father who needed a bump in two party preferred polls would do. “What else was I meant to do? I had already called off going into parliament and drafting up bills about how to deal with the virus, so it’s not like I was ditching work. You can’t ditch work if you cancel it. As I see it, Father’s Day is for one thing and one thing only, publicity stunts. A lot of these people haven’t even got jobs that require publicity stunts, so why are they complaining?”

“I just wanted to have a private moment with my daughters who missed me then turn that private moment into a public spectacle, that doesn’t mean I want the public getting involved in my private life, now that has backfired on twitter.”

When asked if the Premier of Victoria if they had done any large DIY projects, a representative for the Andrews government said something dictatory probably. “When would we have time to do that?” asked a representative, clearly channeling Stalin. “Do you not know what’s going on right now? We’re trying to save lives here.”