World
Man that has always called kids too soft now throwing tantrum about wearing a bit of cloth
August 3, 2020 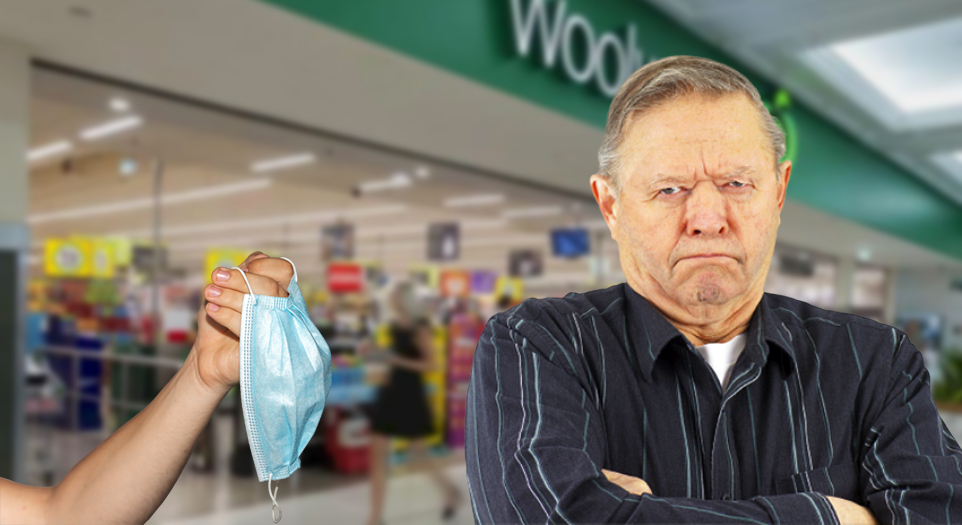 Local Facebook Boomer and full time contrarian Greg Neckvain has today lashed out at the NSW government for suggesting citizens cut back a bit on outings and wear facemasks to the shops.

“This is just like Stalinist Russia,” exclaimed Greg when told he probably shouldn’t be going to the packed pub every night without at least doing the bare minimum of putting a bit of cloth on his face. “It’s my basic human rights to put the lives of everyone around me at risk.”

“The problem is everyone today is too soft,” explained Greg. “Why, back in my day we didn’t have killer viruses. We just got on with life. And even though I didn’t live through either of the World Wars, the Spanish Flu, or an economic depression, I still like to think that my upbringing during the most prosperous period mankind has ever seen was unfairly tough, and that everyone born since the 90s are a bunch of snowflakes. Anyway, what was I saying? Oh yes, I am afraid of a piece of cloth.”

“Besides it only affects old people,” continued Greg, “being 55 that clearly doesn’t include me, and it only kills 1% of people who catch it, so that’ll only be like, 78 million people dead and 390 million people left with serious lifelong medical conditions if we don’t try to contain this thing and if everyone only catches it once despite immunity only lasting three months and the virus not being seasonal. But hey at the end of the day, if I die I die. Sure I’ll probably also infect others in the process, who will then continue to pass on the virus to others until thousands if not millions are dead because of my actions, but germ theory doesn’t apply to me because I’m convinced I’m the lead character in my life story which makes me invincible.”

“Anyway, I’m off to the shops. Gotta pick up some cold and flu tablets to deal with this nasty cough I seem to have picked up somewhere.”